Medievil trade, thought a rudimentary practice and execution, achieved the goal it set out to. A highly organized, mapped and massed event; it formed the basis of modern trade..

Things Needed in Order to Trade:
o   Strong ships
o   Traders - People to do the trading
o   Something to Trade – Everyone wanted luxury goods
o   Storage – A safe place to store goods
o   Marketplace – A place to sell your goods

The Marketplace:
The marketplace was a local affair held each week, which consisted of local traders. Bartering was practiced in the beginning.

Trade Fairs:
Trade fairs where a larger scale of the market place. Fairs lasted for up to two weeks at a time. Traders had to get permission, either a grant from the king or fief owner. There was often a tax that the traders had to pay to the land owner to be able to sell. Sellers were basically renting the space to use. Fairs were held outside, and open to the elements. Fairs often attracted pickpockets or thieves. Sellers rented space in homes to protect their goods. Fairs were noisy, dirty, and exciting. Musicians, traders, and entertains worked at the fair. Sellers hawked and buyers bargained loudly.

Trading and the City:
Merchant and traders were not part of the feudal society, yet they had great influence in it. As trade developed, towns along the trade routes became richer and richer. Some developed into great cities, such as Paris, France. Many wealthy trading towns became virtually independent states, and they soon became exempt from the feudal system.

Trade of Languages:
Trade brought languages to and from different countries. Languages were swapped through trade during the middle ages, and due to this, more and more people learned many more languages. Many good things came out of this. One was that more people became literate and had a chance to be educated. Another benefit of trade was that the first stages of grammar came and Greek roots developed. Greek roots brought epics and legends to the world, which lead to the start of fiction and non-fiction ideas. 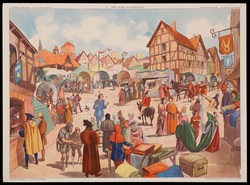 Merchants:
Most merchants joined guilds in order to have better trading. Sometimes, merchants grew to be one of the wealthiest people, if they were smart and clever. Kings and other government officials borrowed money from the merchants. Rich merchants grew very conscious of their looks. They thought that they had to be perfect in order to impress officials or even lowly customers.

Merchants had to travel very far distances to find anything worthy to trade. However, no merchant would go too far due to their theory that the earth was flat and they would fall off the edge.

Merchant's Duties:
Merchants had many duties to fulfill in order to sustain a position in the society. One duty was showing respect and hospitality to higher classes and their customers. Even though the merchants were respected, they had no right to be obnoxious to others. They had to be aware of everything going on in and out of their business. The employees had to be on watch, just like the economy, how the customers liked or not liking the products, how well their items were selling, etc. As you can see, merchants' lives weren't just going around selling things to people; it was hard work that involved lots of thinking and planning.

Money:
During Medieval trade, merchandise was often traded for money or other merchandise. When items were traded for money, they sometimes used gold or silver coins. As the merchants would take the coins, they would weigh them to see their true value. Another type of money that was used commonly was paper money. However, this type of money was only used through Asia and Europe.

The Crusades, which had facilitated the relations with Eastern countries, developed a taste in the West for their indigenous productions, gave a fresh vigour to this foreign commerce and trade, and rendered it more productive by removing the stumbling blocks which had arrested its progress
The bad state of the roads, the little security they offered to travellers, the extortions of all kinds to which foreign merchants were subjected, and the System of fines and tolls which each landowner thought right to exact, before letting merchandise pass through his domains, all created obstacles to the development of Middle Ages trade and commerce.

The Silk Road was in use from around 206 B.C.E. to the early 1400’s when trade almost ceased between the east and the west. It started as an expedition of diplomacy between the Qian dynasty and the Yuezhi. The emperor of china saw value in the treasures found in the western part of India and China where the Yuezhi were, he continued expeditions west-ward until he reached the Roman Empire. Trade on the road declined during the Mongol invasions and trade never really picked back up due to continued raids by bandits and pirates. During the time of its use however, many foreign goods such as silks and other Chinese goods began reaching Europe at a much faster rate producing interest in the foreign cultures of the Far East.

Other products traded along the road included: precious metals, precious stones, glass, and ivory, these items were traded from the Europeans with the Chinese empire. Traded from the Chinese empire was items such as furs, jade, bronze objects and sculptures, lacquer, and iron. Items were traded off along the route as well as in China and the mainland of Europe. Since these items being traded were very valuable, bandit raids started happening along the road, causing merchants making the trip to hire guards or else run the risk of losing their goods. Also traded on the route was religion. Christianity reached the Far East and Buddhism reached the western cultures. People in both china and Europe began gaining foreign goods and had many foreign art pieces where a noble could afford.